Discernment with many voices

On Tuesday, May 29th, I and the other members of the novitiate community lived a day of silence, prayer and sharing.

The day began at 8 with Lauds. At 9:15 am we received indications on how to live the first part of the experience: an hour of individual prayer, sharing in groups, and finally community sharing. We divided into three groups: first year, second year and the formation team. The aim was to identify consolations and desolations, the beautiful and arid moments, the joys and difficulties which the community experienced during the last year. Such as Moses saw the Lord behind him after his passage, so did we reread the year to understand where and when God had given something of himself.

First individually, then as a group. This moment allowed us to notice points in common, and to identify important elements that one group had underlined and the other not. It was enriching.

After lunch the same method: individual prayer, sharing in groups, then sharing all together. But the purpose was different. We did not reread the year, but with what had emerged in the morning review we searched for decisions to recommend. Here too we found convergent points and others less so. Each gave his own contribution, aware of being in search of the common and shared good.

It was something new for me. Prayer and sharing not simply for my journey, but with an attentive gaze upon the experiences of the community and listening to what the Lord wanted to tell me for the best of the community.

There is still a third step: to entrust everything to the prayer of the Novice Master so that the Lord shows us the way to go. This discernment does not want to arrive at concrete decisions by summing up the contributions of individual novices or formators. The exercise aims to identify, with the help of the Lord, recommendations which are deeply shared and community oriented that can show on which steps already made to insist or what new steps to take. The superior then collected and noted the consolations and desolations that had emerged, the proposed recommendations, and now brings them before the Lord with this intention.

The exercise shows the steps of the Ignatian way of proceeding: prayer, sharing, individuals’ proposals; trust in the superior, who receives all this, in turn prays and reflects, and finally decides.

We ended the day with the Eucharist. There Jesus listens and gathers in his embrace the fragility and the resources, the struggles and the strengths of the whole community.

At the end of a three-day spiritual retreat, on Monday, October 17, 2022, during the community Eucharistic celebration, the 10 first-year novices entered the second probation. It was a simple but meaningful moment that marked the end of the so-called first probation: in the mind of St. Ignatius, the first probation is a brief time of “trial” that is placed at the beginning of the path of formation in the Society and that helps to verify the choice; with the second probation, however, begins a rather long time of real formation and that spans the two years of novitiate to continue with the successive stages of study and service. 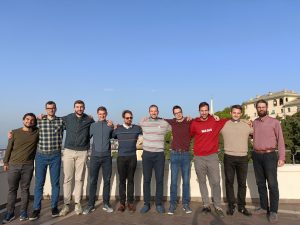 Did they tell you there is a war in Europe?

Do you love me?

The keys to the house

Christmas carols in the Novitiate

Advent time: so what?

#breathingtogether – A Global Ignatian Vigil Prayer for the Season of Creation

With a little bit of creativity…

Coronavirus and community in good Company

The round forest with four corners

The nativity scene of Genova

A course on the social apostolate

Putting the fragments back together

Where are the tools?

“Would they be French?”

This website uses cookies to improve our services and your user experience. By continuing your navigation without changing your browser settings, you agree to receive cookies from our website. For more information visit this page.